To celebrate the second birthday of the replacement SuperJX Display, an anniversary edition was created that resides in firmware version 1.05 onwards.

Starburst emulation is fully configurable, via the MIDI menu setting. It is great for when one is bored with the other two built in layouts.

This was done after a request was made for an original starburst VFD tube that cannot be made available without considerable tooling cost. It was a lot of fun programming and integrating with the firmware. Great if you get bored of the other layouts available in the old firmware.

If you already have a replacement VFD display, contact us for a system exclusive file to download the new firmware.

How To Set Vector Mode

To enable or disable the Vector font in Roland Emulation Mode, do this:

Press VALUE and rotate dial clockwise and anti-clockwise five times so that the display setting alternates between OFF and 100%. On the fifth time you enter OFF the display changes to Vector mode when setting returns to “OFF”, the Roland emulation mode. 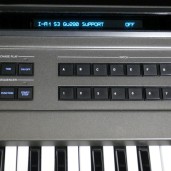 Press WRITE to save “Roland Mode” and make sure that the instrument is not powered off for at least 30 seconds to allow the display to store the new mode. Now you can enjoy the 14 segment starburst emulation!

The design was done initially using HD6303, GU280 and Firmware emulators on a Linux platform. Once tested, a version was developed using a test display connected to a PCB and debugging tool.

The font was perfected and checked for the best result possible using 16 bit words to hold data for each character. 14 bits were used to identify segments and two remaining bits were used to “blank out” corners to improve some of the characters.

Two data tables are used to hold information: Segment drawing data & character segment data. It resulted in very compact memory usage for a whole font and uses more CPU time (not that it matters in this case) due to the line drawing calculations.

The full font on a test VFD is shown in the picture below:

Development tools for the job! 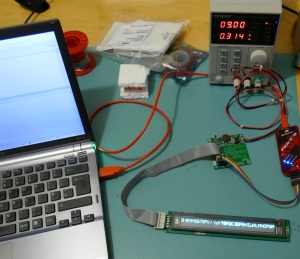