I purchased an Akai S3000XL because I have a dislike for PC based DAW software and wanted to have some fun connecting a Midibox Seq V4 hardware sequencer to trigger some sampled sounds. The Akai also has envelope and resonant filter features so some really creative ideas for interesting & sequenced soundscapes can be built up easily giving a unique sound.

When the S3000XL arrived, I was disappointed at first to find that the seller had failed to tell me that the Analogue IO card was missing, but since I paid very little for the sampler, it had a bright display, 32MB memory and Version 2.0 OS it didn’t matter especially since I have multi-track digital recording on a Tascan DP24 anyway. It turned out very well for fitting an adaptor card that interfaces a CF card to SCSI. In the end, I located it where the analogue output card normally resides.

It turns out that the Analogue & Digital IO card is often sold separately and is readily snapped up by MPC users who want an upgrade as it fits that product too and doesn’t come as standard. It might be that you want to fund an Aztec Monster card by removing and selling the IO card to an MPC user!

There are plenty of locations that the Aztec can be installed in. Here I suggest two, in the middle between the power supply and main board or where the Analogue and digital IO should go (as per following instructions).

Fitting an Aztec Monster card gives the sampler a new lease of life and it is amusing to see samples load almost immediately too. The maximum disk size the Akai S3000 can address is 510MB so a 512MB or 1GB card will suffice.

It is silent and fast in operation compared with using an IDE adaptor to interface an IDE disk drive or obtaining an old SCSI drive that has the correct interface. It consumes very little current reducing stress on the PSU and can fit all in one box.

Easy to fit location if you’re missing the IO card.

Some metalwork could be made to place it above the mains filter and possibly cut a slot in the rear for easy removal of the card. If doing this be sure to add an additional earth wire to the panel you add, to ensure safe chassis connection as well as a solid ground for the Aztec Monster card. 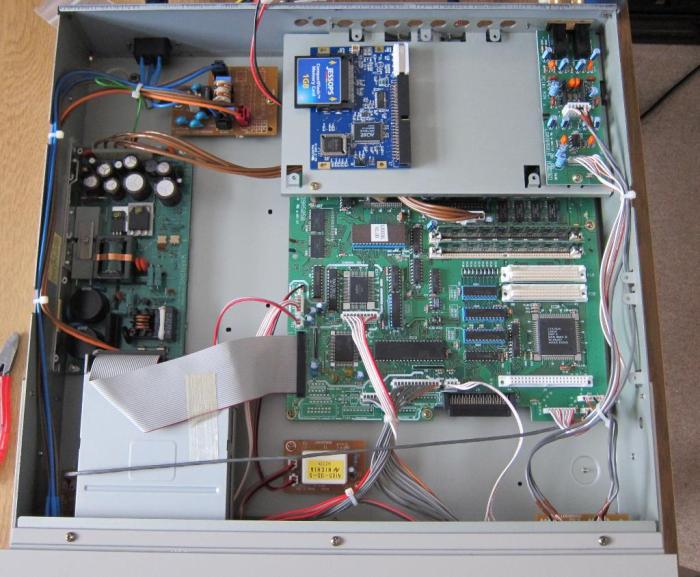 Position 2 – In between PSU & Motherboard

If installing in the middle a simple L shaped metal bracket could be made to hold it vertically or use standoffs to install it directly to the base. Be wary of metal particles wandering about when drilling it. There are some convenient holes already in the base to mount a bracket to avoid any drilling in the box.

Parts For The Upgrade

It is much cheaper to buy the ready made cables on ebay and adapt them rather than buy IDC cable, IDCs, crimps and shells separately. 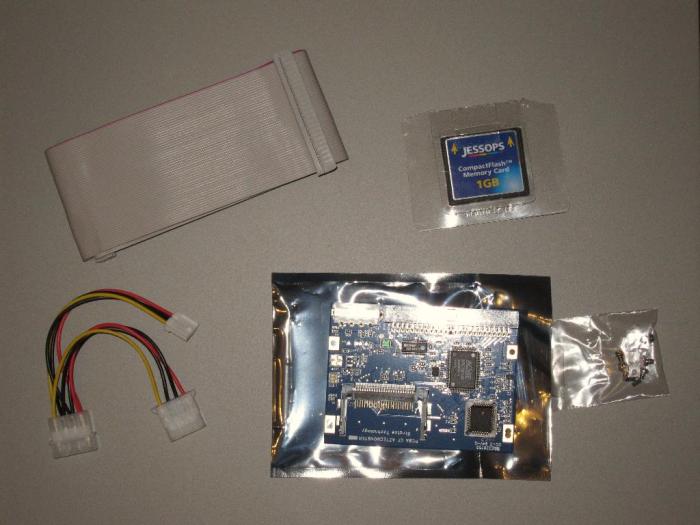 The 50way SCSI connector and a convenient 5 volt power supply is located on the main board as shown below. The 12 volt connection is not required on the Aztec card and ideally I would have used a 0.2” Molex shell to connect to the 5v power connector but I decided to solder it instead.

Mount the Aztec card in such a way as to make the cable routing easy using the spacers and screws provided. Note that the black screws are used to secure the card and silver screws to the metal plate. In the spacers, the hole sizes are different for each screw type.

The orientation I chose was to keep the card as close as possible to the edge of the casing and line it up so that the LEDS on the PCB can be seen through the holes in the rear of the casing. It also means that you don’t have to fold the cable to route it and it can be kept short to avoid any possibility for data errors. I did test it on 0.5m cable and it worked perfectly as far as I could see so probably doesn’t matter.

Note that you should be handling the card using an anti-static wrist strap and earthing adaptor plug. The electronics inside the Akai and on the card are sensitive to static electricity and may be damaged.

At this point it is a good idea to fit the Memory card and set the links as per the picture above for SCSI ID 5 and active termination “on”.

The S3000XL does not have any non-volatile memory so will not remember the SCSI ID settings so it is a good idea to use default “ID 5” unless you have other drives to attach and want to default to those instead. Failing that, it can boot off a floppy and use new settings you have saved by “saving operating system”. For me not using “ID 5” just causes more button fiddling on start up that I don’t want. 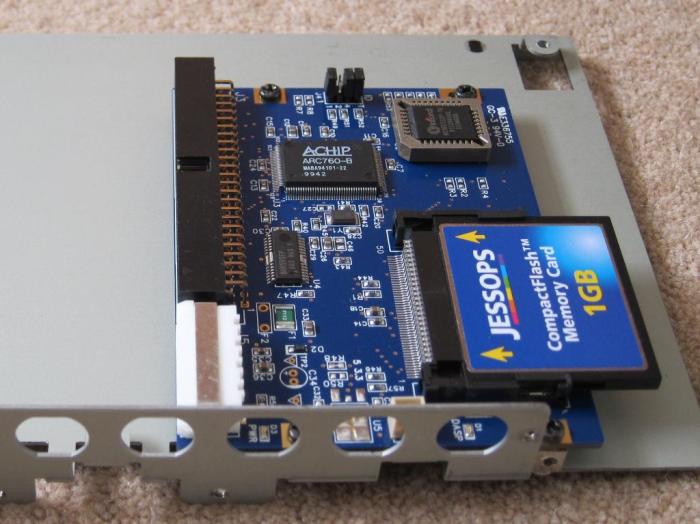 From the floppy power cable, make up a 7” long 5v power cable by extending the red and black wires. I carefully removed the crimps and soldered new wires to keep it tidy. If you don’t have a 0.2” Molex shell and crimps, tin the wires on the other end with solder ready for attaching to the 5v power connector.

Attach the red and black wires to P21 on the main board either using a soldering iron or a Molex connector. Red wire (5v) is pin 1 and Ground (Black) is pin 2.

In one forum, one user has reported that  P11 (50 way SCSI) was installed back to front on their unit, check first that this is not the case. You will have to make a special SCSI cable if it is by putting the connector on back to front if it is.

At this stage it is a good idea to install the SCSI cable onto the mainboard, especially if it has a strain relief fitted. In these pictures I didn’t and fitted it later.

Install the metal panel making sure that the correct screw is used for the spacer that attaches the panel to the main board.

Connect the power cable and install the Stereo input card. Place the cables back in place using cable ties for the brown power wires, Aztec power and audio cabling.

Install the SCSI 50 way IDC cable, keeping it away from the mains filter wiring. Choose a length that allows you to remove the card easily, in my case it is essentially permanent and I am not interested in removing it apart from servicing.

If you don’t want to use a cut down SCSI cable, it will have to be folded up carefully and secured in place. The photo below shows what it could look like.

In The SCSI Menu press soft key for Format.

Select the “Hard Disk” using the data knob and configure the partitions you want. I chose to allocate a partition size that can hold the entire memory and leave nothing for hard disk recording. 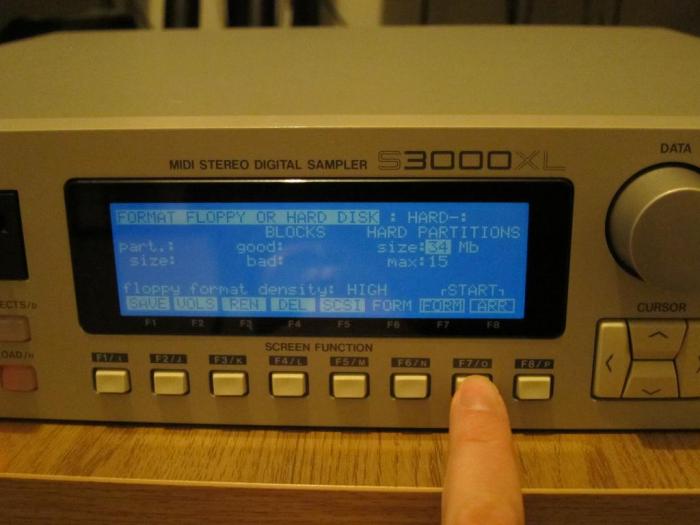 Press “Form” followed by “Yes” to confirm the formatting process.

This only works for certain memory cards and as I used an old card from a camera, it wasn’t compatible. In this case try the “ARR” option instead.  If this doesn’t work, like mine didn’t, you will have to get a card reader for the PC and format it to S3000 format using the free version of “Chickensys Translator” software: Chicken Sys Translator Website

After formatting using “ChickenSys” software and installing the card again, pressing “ARR” option again will format it in the size you want. Do not remove the card whilst the power is on the sampler. It is not hot swappable and could result in damage. 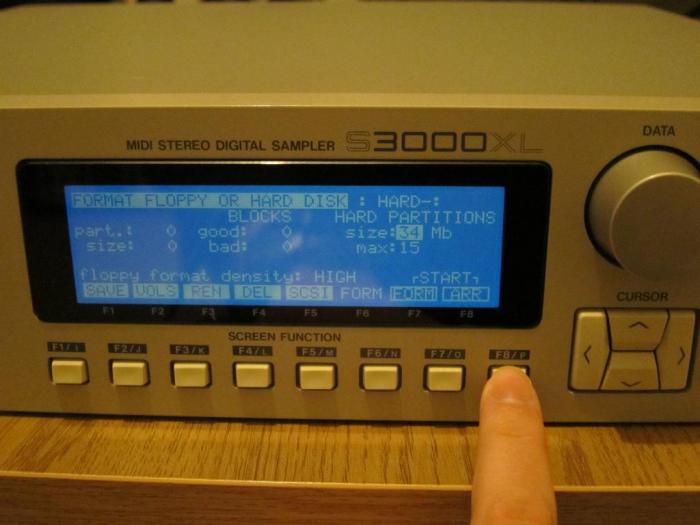 Below the formatting process is shown on screen and is a long process. At the end it confirms how much hard disk recording space you have, or not as in my case as it was intentional to allocate it all for sampling. 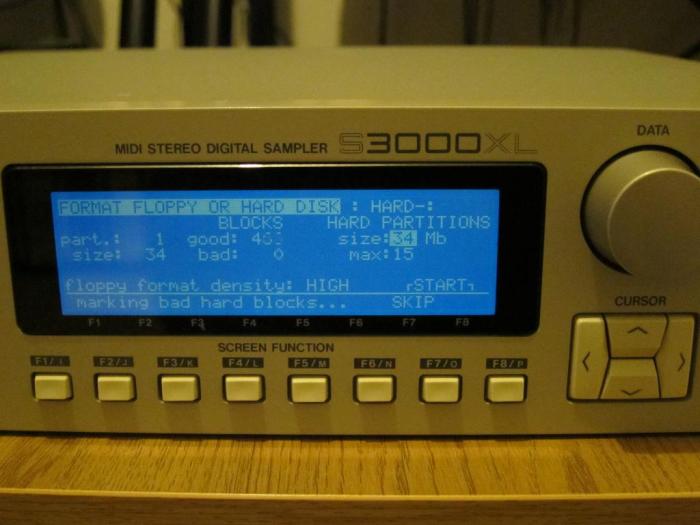 Saving & Loading data using the normal menus should now all work perfectly and very fast. Looking in through the rear panel, the power and access LEDs can be seen during disk operations. 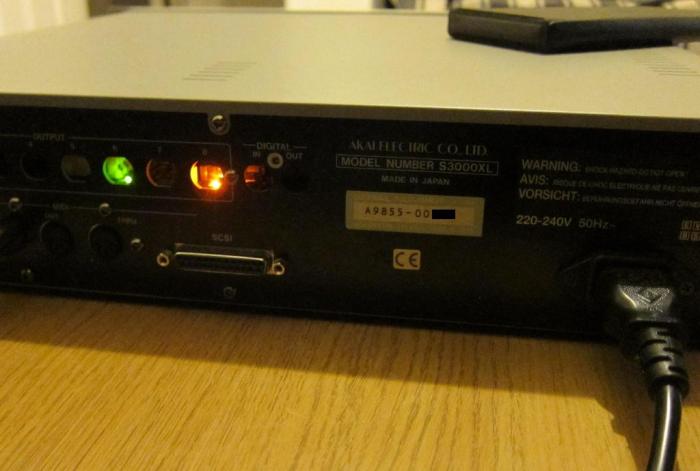