After completing a large project upgrading and refurbishing a Roland MKS70 to a fully modified specification, a direct audio comparison with a JX10 was disappointing. The hum level was much higher on the MKS70 than the JX10.

By searching on various sites, a detailed experimental study and modification by synthRodriguez (online forum at gearsz.com) was found and his detailed report assessed.

The fix below is based and inspired by synthRodriguez’s practical work; Alone, his mods are brilliant but further tweaks completely removed the issue.

Note also that if the instrument is earthed or connected to a rack, a ground loop can be created external to the instrument, so some set ups may require a “hum killer” or isolating DI box. Testing this mod is to be proven using headphones and the MKS70 only connected to MIDI to be sure of an accurate comparison.

Before delving deep into a modification, let’s take a look at the Roland wiring layout in the MKS70.

At first glance, wiring layout doesn’t look optimal, however it suits speed of manufacturing because the loom is built up in one complete unit.

Essentially, the wires running over the module boards carry power and ground return. The ground return is also at same potential as the casing, so the gap between the casing and the power return wires create a large inductive pickup loop….and there are two of them. It means that any hum or digital noise emitting from the transformer or PCBs get caught up and induced into the ground of the Module Boards eventually reaching the audio outputs.

The picture below shows how the diagonal cable running over the module boards CPU sections. The worst pickup loop is between the bottom case and Module Board B as it resides over all CPU areas and the transformer.

The technically “sharp eyed” will also notice that in the picture below, the PWM upgraded ROM B is incorrectly installed and should be ROM C if the CN1 cable pin 10 has no black wire. 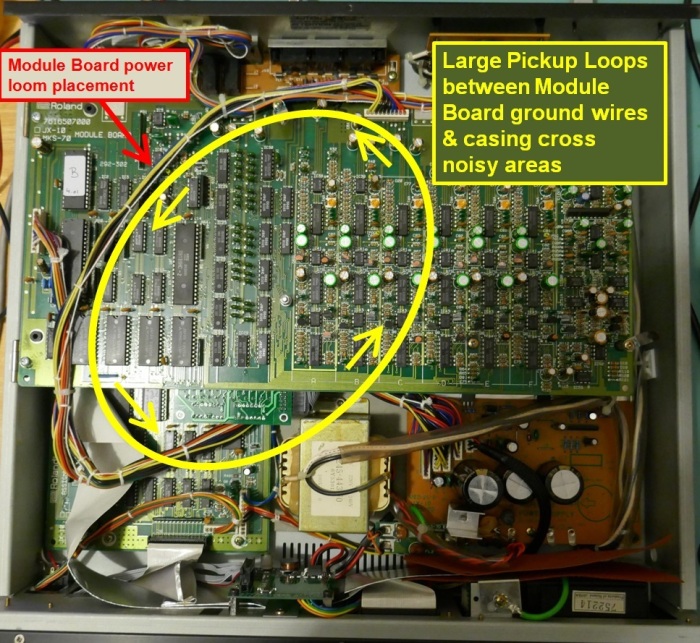 The MKS70 Board Removal page shows how the carefully dismantle the internals as there can be issues when doing so.

Handy Tip: For best possible results, mess about with the wire bundles so that the black wires end up being as close to the metal base plate as possible.

In tests, placing the audio wires up against the power filter made little difference, everything is primarily about ground path loop area to casing. What really makes a difference is routing the audio wires directly over the ground plane on the module board. Do not route near to filter (obviously) or “inbound” of the ground plane on the module board itself (despite being convenient to wrap wires around components!).

Note that it doesn’t matter if C or B ROM’d module boards are on top or bottom:

Steps below assume Module A board with ROM “B”  on bottom:

Handy Tip: If the old wires wont budge because they have been in same position for so long, use a hairdryer to warm them up before letting them cool down in the new position.

The collection of close up pictures below summarises the key areas. 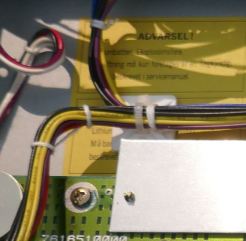 If You Are Really Fussy

In tests, moving the mains wire tie point away from the module board didn’t seem to make any perceptible difference, the fridge running in the kitchen caused more noise coming out of the speakers!

However, here is an alternative routing for the AC mains and AC analogue power. Be careful not to cover the bridge rectifier heatsink as it gets quite hot. The red and black wires (analogue AC power) have to be disconnected, shortened and twisting them together gives optimum results.

Copyright © 2019 Super Synth Projects, Guy Wilkinson but note that this work is based and inspired by synthRodriguez on an online forum at gearsz.com. Details can be found on the JXZone Info page under “Hum Modification” here.