Needless to say, the Software was exhaustively tested, simulated and reviewed. However, the electronics and the impact of putting in new boards into an existing instrument using a new VFD can have a shocking impact on thermals and noise on audio due to the power consumption and new switch mode converters.

A few people have asked how much heat the new display and PCB generate. The fact is, very little. To make sure the power supply is not stressed and is going to have a long life, a thermal camera was used to take a look at component temperature rises. 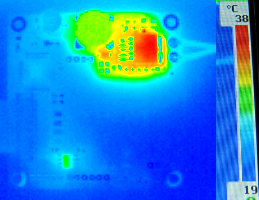 The maximum temperature rise was under 20 degrees C for the power regulator when the PCB is placed under cover on a flat insulating surface for one hour. This translates to a maximum ambient temperature for the board of >90 degrees C and the Super JX would never reach that temperature internally.

In this type of test, stressed components usually appear as shining spots. It was the case for the first prototype and components recommended by the simulation tool were changed. The picture below shows the first prototype where a diode had a rise of 28 degrees, acceptable, but may as well be changed to achieve the best design. Without access to a thermal camera, this kind of issue would never have been spotted.

Looking at the GU280 display revealed higher spot temperature rises but still acceptable for its application. 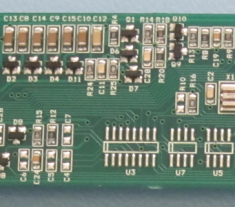 A temperature rise of 27 degrees in an area in the middle of the GU280 PCB is observed. This leads to an important conclusion; Adhesive pads must be avoided in these areas shown to prevent heat build up reducing its lifetime. The installation guides point out this fact even though in practice it may not matter at room temperatures.

As a personal guideline, a max rise of 20 degrees C is used for power devices and 10 degrees for everything else in high reliability applications.

To make sure that the effects of conducted emissions from the new VFD and power supply were not impacting the audio path of the Super JX, audio tests were set up by connecting to a oscilloscope. No difference was perceived on a low cost scope and spectrum analyser wasn’t available so a modified JX10 running both old and new displays was tested connected to a 100 watt per channel HiFi. A switch was used to select GU280, Roland or nothing. The volume was turned up to maximum and the chatter from the different arrangements could be just about heard.

Some power supply components were adjusted and re-characterised to get the best result for the GU280, after which the results were:

It meant that the installation guides were written to recommend different power options depending on install complexity and how much it mattered to the installer. An improvement is made by a different power cabling or supply arrangement.